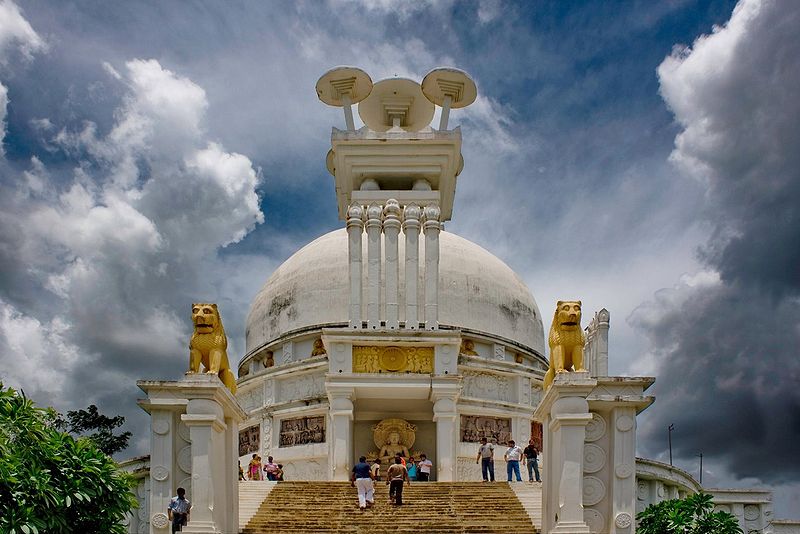 Dhauli is a small town 8 Km away south of Bhubaneswar, located on the bank of river Daya and holds great significance for the followers of lord Buddha. Dhauli is said to be the witness of the reform of Ashoka's character.

Shanti stupa is a Buddhist Peace Pagoda and is the main attraction for people who believe in Lord Buddha or appreciate detailed artworks or carvings. This is a big white building covered with the dome on top and beautified with intricate carvings on it.

These carvings are elephants processions, reclining Buddha, sleeping beauty, emperor Ashoka giving up on war by offering his sword to lord Buddha and many others. There also stand two pillars like Ashokan pillars on the entry with two lion at the top standing as to guard the lord. The stupa was built by Kalinga Nippon Buddha stupa in collaboration with Japan Buddha Sangha in the year 1970.

This is the area which is believed to the land for the Kalinga War in the 3rd century B.C. between the Mauryan Empire led by Great Ashoka and Kalinga kingdom. The war was so intense that it is said that Daya's water had turned red with the bloodshed because of the massacre. This also led to significant change in the beliefs of King Ashoka and he eventually adopted Buddhism. His responses to this war were recorded in forms of Ashoka edicts, which are essentially rock structures with inscriptions on them. Dhauli has several major Ashoka edicts and it is now an important centre for Buddhism in India. Ashoka built several Stupas, Chaityas, Pillars around the town and did his best to create a peaceful society by helping others post war. Dhauli has a beautiful Peace Pagoda which attracts thousands of tourists every year. Besides Buddhists, Hindus also visit Dhauli to visit some of the ancient temples of great reverence situated in this beautiful town. There are also other attractions in Dhauli like rock cut caves, Sadharma vihar monastery, which would definitely make your visit worth the time.